For the love of journalism: one adviser’s path from newbie to yerd 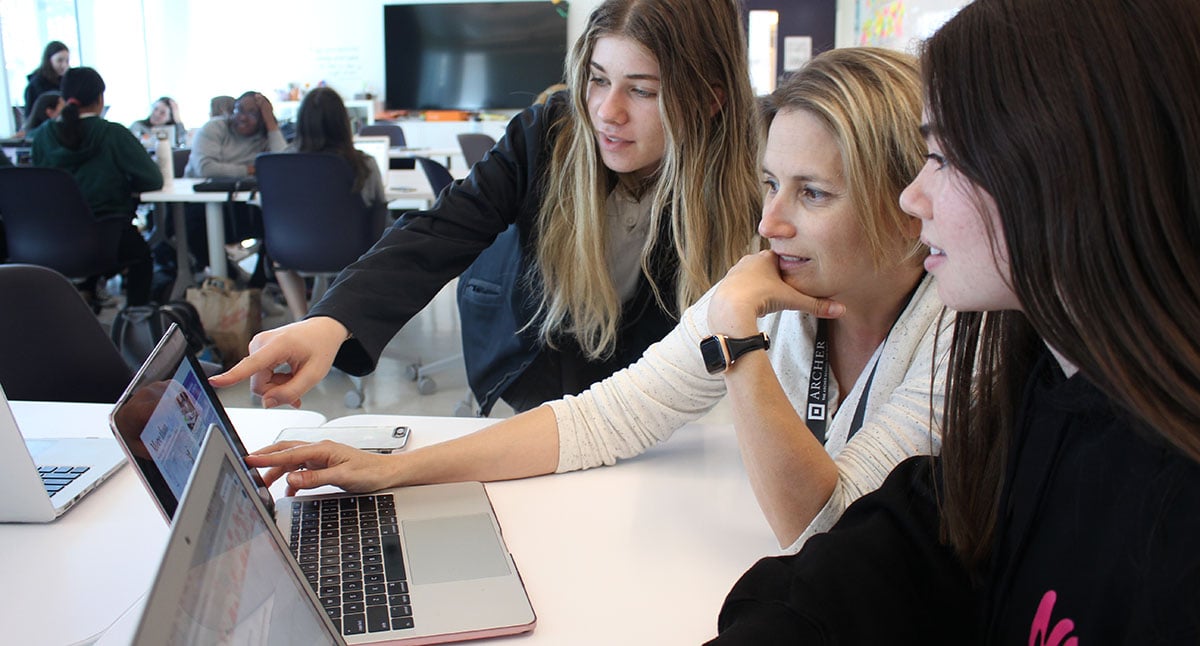 Adviser Kristin Taylor (center) examines a spread with co-editors in chief Siena Mizel and Julia Wanger. Mizel and Wanger have been on yearbook staff all four years of high school. Photo by Quincy Gordon

Nine years ago, Kristin Taylor was a flailing, reluctant adviser. Today, she couldn’t imagine her life without journalism.

From time to time, we share guest posts from Balfour advisers. Kristin Taylor is The Archer School for Girls newspaper and yearbook adviser. This is her 23rd year teaching and ninth year advising.

If someone had told me in 2011 I was about to reinvent my teaching career, I would have laughed—loudly and for a long time. After pouring so much time and energy into being an English teacher since 1997, I couldn’t imagine building the extensive new knowledge base and pedagogy I would need to teach scholastic journalism, advising both newspaper and yearbook. Now, in the midst of virtual editorial board meetings and reimagining student media in a pandemic, I can’t imagine giving either up.

I admit, I was a reluctant adviser at first. Our school had a small journalism program with a knowledgeable teacher early on, but after that teacher left, the newspaper devolved into a club that met once a week and produced one to two papers per year. I think the best verb to describe my work as an adviser back then is “flail.” I was only a step ahead of the students, if that, and I felt constantly overwhelmed. We transitioned the paper to online-only, but I knew I had to do something drastic if we were ever going to grow. Having no idea about the amazing professional communities and resources out there, I developed a basic curriculum and launched an introductory journalism class in 2013. It was tremendously challenging and tremendously fun to learn alongside my students as we developed our scrappy new digital newspaper. But when I took two of my students to the JEA/NSPA National High School Journalism Convention in spring 2014, I realized how big the scholastic journalism community was and how much I still had to learn.

I applied and was selected to be an ASNE Reynolds Fellow at Kent State University that summer, and I spent two intense weeks immersed in scholastic journalism. My time at Kent inspired me to do something I never thought I would do—go back to school to pursue a second Master’s degree. I was accepted into Kent's online program for journalism educators that fall, and Candace Bowen became both a mentor and friend. Over the next four years, I grew my program and became deeply involved with JEA, focusing primarily on scholastic press rights. In 2016, only three years after we became a "real" program, The Oracle won its first Online Pacemaker from NSPA.

Just as I started to feel like I knew what I was doing, I found out I was going to take over yearbook. A newbie again! My journalistic foundation was strong by 2016, but I was a complete novice when it came to graphic design, digital photography and Adobe Suite. Luckily, I’d taken yearbook adviser extraordinaire Sarah Nichols’ Advising Yearbook class through Kent the summer before. Before her class, I thought a ladder was something short people need to reach the top shelf, and although I agreed someone’s face shouldn’t go in a gutter, I had no idea what that had to do with spread design. More importantly than learning the terminology, however, Sarah’s thoughtful, journalistic and student-centered approach to yearbook gave me something to aspire to when I took over the program.

My first yearbook staff totaled 16, only two of whom had ever taken yearbook before, and the previous adviser was gone. I started the year with honesty. Just like when I helped launch The Oracle while figuring out journalism, I was going to be learning how to make a yearbook alongside my students. I believed we could do it, but we were going to have to figure out how as a team. I had a vague idea of what I wanted our yearbook to be thanks to Sarah’s course, but I had very little idea how to achieve it.

My Balfour sales rep Corey Mundwiler and account executive Jessica Youngpeter fielded endless emails, texts and frantic cries for help that first year. At one point, we lost every photo the students had taken (our IT department was able to recover them, thank goodness, but not before we had a collective staff panic attack). We submitted pages for every deadline, but all I could see were the errors whenever proofs came back. But we kept going. We laughed a lot. We formed an identity as a staff of #yerds and—somehow!—we ended up with a book at the end of the year.

Siena and Julia, two of the ninth graders who were on that first yearbook staff, are now seniors and co-editors in chief. When I look at what we’ve accomplished as a team these past four years, I am filled with gratitude. As much as I have learned from my master’s classes, conventions and workshops, Siena and Julia have taught me the most about what it means to be a yearbook adviser. Yearbook takes hard work. It takes adaptability and resilience. It takes laughter. Mostly though, it takes dedication.

The 2018-2019 Hestia's Flame yearbook staff celebrate after unboxing their yearbook. Their theme, drawing on Archer being a single-sex school on Sunset Boulevard, was a play on words: "Herizon." Photo by Kristin Taylor

I’m thinking about them a lot as we finish our fourth book together. They will graduate soon, but who knows what that will look like? Instead of finalizing the book and sailing into a relaxing last quarter, they have scrambled to redefine the role of yearbook during a pandemic, to transform and reimagine spreads, to reinvent editorial board meetings and proof reviews in a virtual space. They never once complained—they just said, “Okay, what do we need to do to make this work?” and then did it. They reached out to all the staff members, offered to take over anything unfinished and planned ways to keep our team spirit strong as we finish this unprecedented year. They make me so proud I could cry.

Co-editor in chief Siena Mizel designed this current events spread to replace a traditional spring one. She traced the unusual year and focused on how the coronavirus impacted local, national and global events.

I’ve changed so much since this journey began. I’ve taken countless students across the country for conventions and led workshops with them. I’ve attended Balfour’s summer camp with yearbook staffers every summer to plan each year’s design package. I did research into press freedom in private schools and finished my master’s in 2018. I’ve completed critiques for other schools and mentored new journalism advisers. Just a couple of months ago, I was honored to be elected to the board of directors for JEA and take on the role of director of the Scholastic Press Rights Committee this month.

If I could go back to my 2011 self as she laughed at the thought of reinventing her teaching career, I would let her laugh. I would say, “Yep, you’re right, this is going to be one of the hardest things you’ve ever done. You are going to flail a lot, and you’re going to fall on your face more than once. And you have no idea how deep into this rabbit hole you’re going to fall.” Then I’d tell her the secret behind why so many of us fall in love with scholastic journalism—the kids.

I don’t know how, exactly, we will celebrate Siena and Julia and all my other beloved seniors when they graduate this year, and I can only imagine how this global crisis is going to continue to impact our communities. What I do know is scholastic journalism has become a core part of my identity as an educator, and my role as an adviser brings me solace and joy in these challenging times. Scholastic journalism gives students agency and a voice like nothing else in high school. When I see them redesigning a spread, coming up with a bad pun for their cutline or debating the ethics behind how to cover a pandemic, I’m seeing our future.

Don’t worry, world. If there’s one thing I’ve learned over the past nine years, it’s this: even when you feel overwhelmed and out of your depth, with dedication, hard work and community, we can do anything. We’re going to be all right.

To read more by Kristin Taylor, check out her Little but Fierce blog.