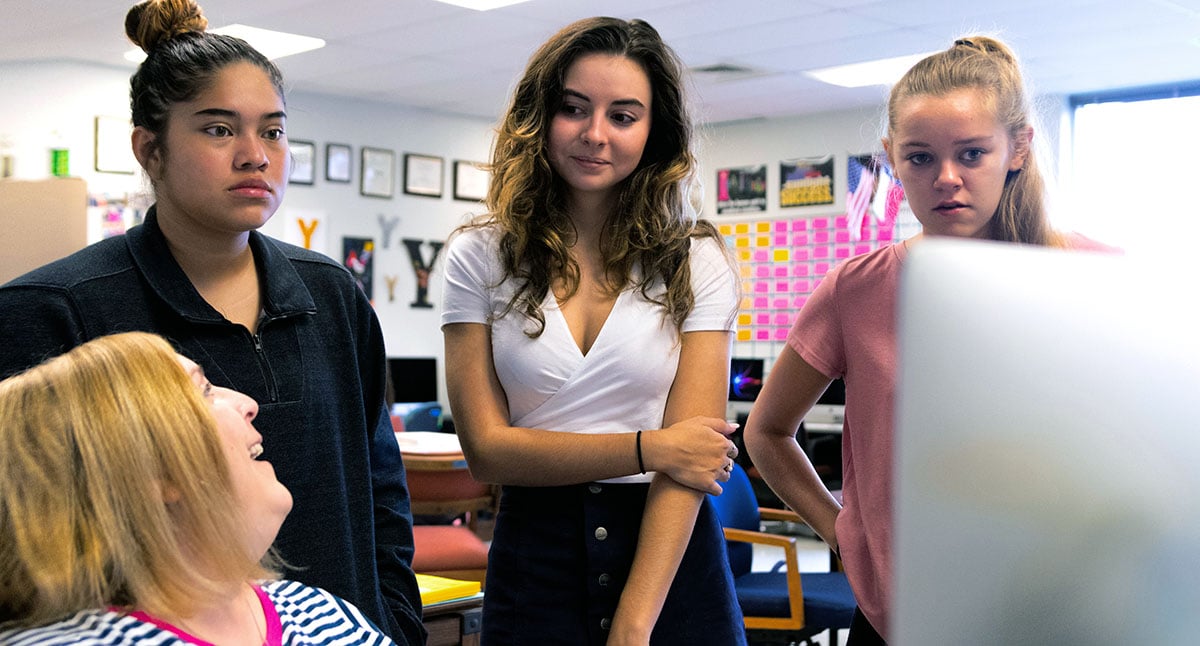 From time to time we feature guest columns from Balfour advisers. In this guest post, Hendrickson High School adviser Kari Riemer shares how The Talon moving to a weekly chronological yearbook benefited her staff and school. This is her 31st year teaching and 27th advising. This post originally ran in the Fall 2018 issue of Balfour’s magazine Elements.

We transitioned from traditional sections to a weekly chronological organization over a couple of years, starting with breaking things down by season. I was beginning to feel a traditional organization limited coverage. How do we cover everything that goes into playing a sport on one spread? What do we do with pages in the book allocated to clubs that end up doing nothing?

With a seasonal organization, active clubs and interscholastic sports still had their own spreads. We grouped organizations under headings like “Service” for NHS and Student Council or “Perform” for band and theater. If groups were active in more than one season, then they would be on more than one spread in the book.

After three years, I really started to get the itch to try a weekly organization. I’m not going to lie; my kids were skeptical. Ultimately, it was their decision to try it, but I know they were just humoring me at first.

More important, I felt like my yearbook kids were journalists. By assigning them spreads by week, they were more likely show up, photograph and interview as events were happening. And if something happened that was unexpected, we had the leeway to cover it. The first year we switched to weekly coverage, our beloved softball coach and FCA sponsor passed away from a heart attack the night before “See You at the Pole.” That event became an impromptu memorial for him with family members, people from across the district, and so, so many students showing up.

That spread became the focus of the week’s coverage. Before this happened, the staff would have allotted half a page, at most, to FCA. Traditional organization wouldn’t have allowed the staff the flexibility to cover an unexpected situation like this the way it deserved to be covered. The last two years there have been protest walk-outs that we were able to cover because they fit easily in the week they happened.

Hendrickson High School uses a weekly format for their chronological yearbook. It allows them to give extra coverage to major events like “See You at the Pole” and blended coverage on other weeks, featuring student life, academics and sports on one spread.

Our readers had to get used to the new organization.  If you are considering this change, I suggest you describe it in an explanation you pass out with your book. After the school community understood how the book was set up, its response was overwhelmingly positive.

Initially, I had some complaints from groups that were used to getting a spread, like dance and band, but they quickly realized they were getting more coverage than before. We covered more than the halftime show by featuring summer practices, fundraising activities, Friday preparation, etc. If you want to provide real-world coverage, take on the challenge of chronological organization.