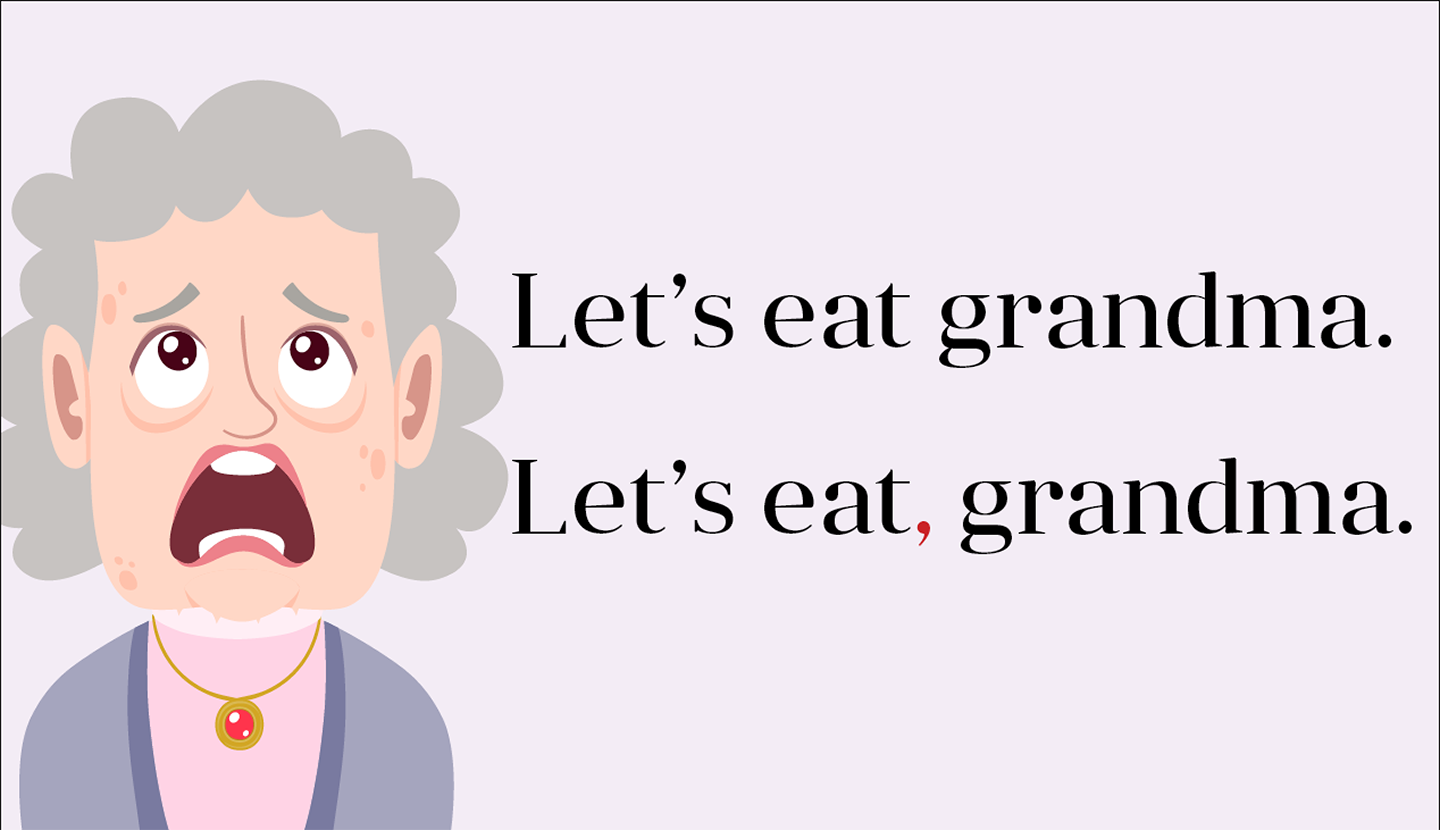 Commas shouldn’t be a matter of life or death. But grammar geeks like to joke they save lives. Consider these punctuation death sentences:

All joking aside, the omission or misplacement of a comma alters the meaning of the sentence. As Lynne Truss notes in “Eats, Shoots & Leaves,” commas and other punctuation marks provide understanding and convey meaning: “Punctuation herds words together, keeps others apart. Punctuation directs you how to read, in the way musical notations directs a musician how to play.”

Commas have a range of responsibilities: dividing lists, joining sentences, indicating pauses, directing thoughts or action, and more. Their inclusion or misplacement can drastically alter the meaning of a sentence. Take the grandma example. Without the comma, the speaker is recommending grandma as the dinner choice. A precisely placed comma changes the meaning. “Let’s eat, grandma” is the speaker telling her it’s time to eat.

Commas separate words in a series, but use of the final comma is debatable. AP Style, the style guide reporters follow, excludes the Oxford comma. The comma is considered unnecessary since it can be replaced with the word and or or and there is already an and or or at the end of a list.

“The T-shirts were green, yellow and blue.”

But the final comma is not always a redundancy. In some cases, the Oxford comma is necessary for clarity when the list items are not single words.

“The eighth graders voted on possible school colors: maroon and gold, blue and silver, and green and white.”

The Oxford comma also can help avoid confusion or misunderstandings.

“I adore my sisters, Beyoncé and Kelly Clarkson.” 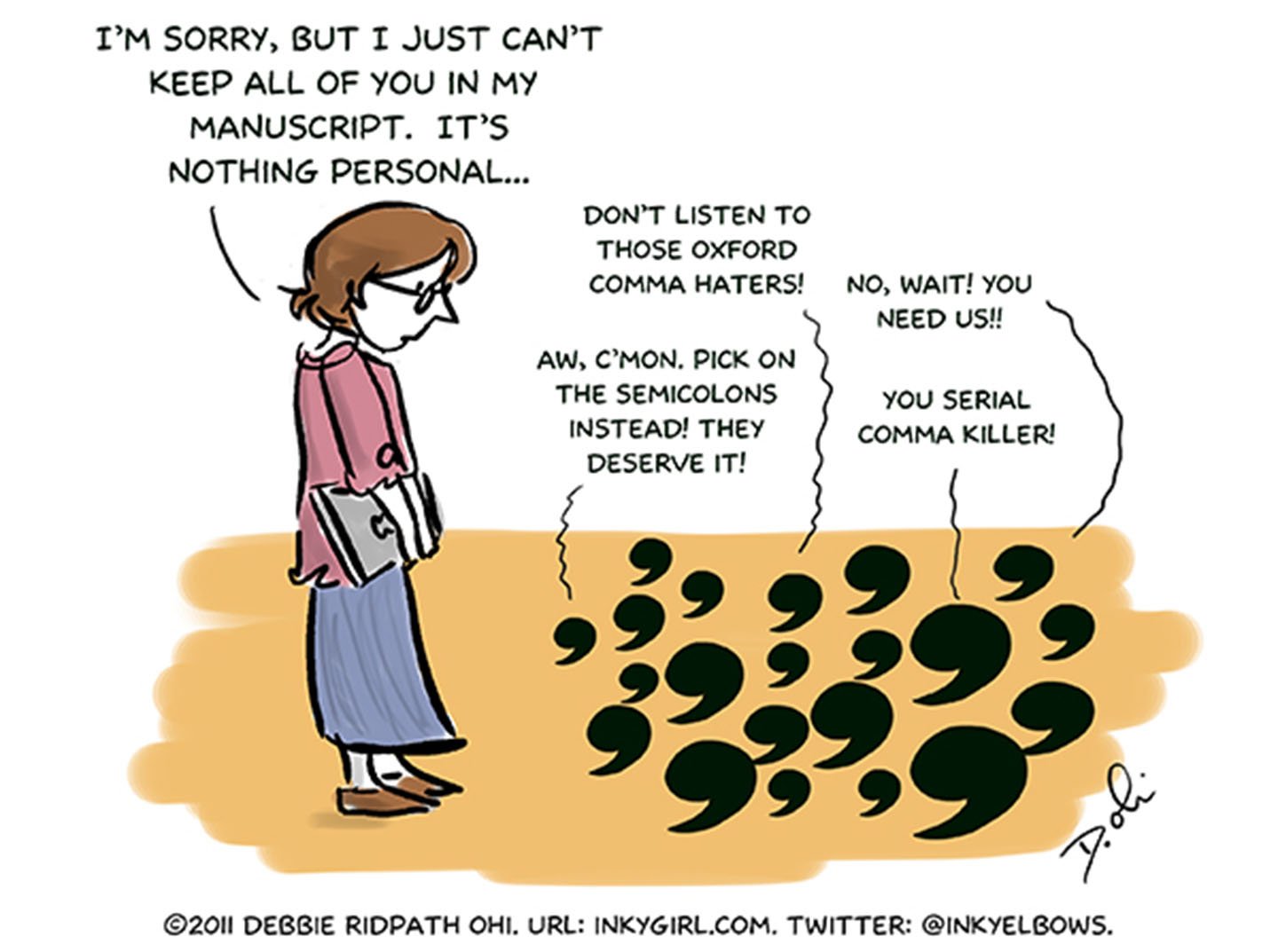 Reprinted with permission by Debbie Ridpath

Originating in the 16th century, apostrophes indicate a possessive or the omission of letters or figures. This punctuation mark often confounds people when it comes to “its” or “it’s.” “Its,” like his, hers, ours and yours, is a possessive pronoun and does not include an apostrophe. “It’s” is a contraction for “it is” or “it has.” If the word doesn’t stand for “it is” or “it has,” then the correct choice is “its.”

“It’s nice you came over for a visit.”

“The school is proud of its 10 Merit Scholars.”

Another troublesome area is the use of apostrophes with figures, particularly with dates. An apostrophe is not needed when using all four figures: “1800s” not “1800’s.” Also, it’s “the ’80s,” not “the 80’s.” The ’80s notation leads to the other apostrophe mistake. The apostrophe notes letters or figures are missing and the punctuation mark should not be an open quote mark. This requires manual adjusting because the computer software defaults to the open quote mark, to face toward the numbers. The software recognizes the blank space before the word and imparts the wrong curvature to the mark, thinking you’re starting a quote. This creates a backward apostrophe. But this is wrong for words or figures using an apostrophe. Apostrophes only go in one direction, even with abbreviations of years: “summer of ’68.” Note, this is particularly noticeable with smart quotes.

One last area of punctuation for a blog post concerns quotes. Punctuation in quotations can confuse writers. Here are a few simple rules:

Punctuation makes all the difference. It provides clarity for the reader and conveys meaning. And at the very least, a little punctuation keeps pandas and grandmas safe.